Beat the Heat with Texas Sage 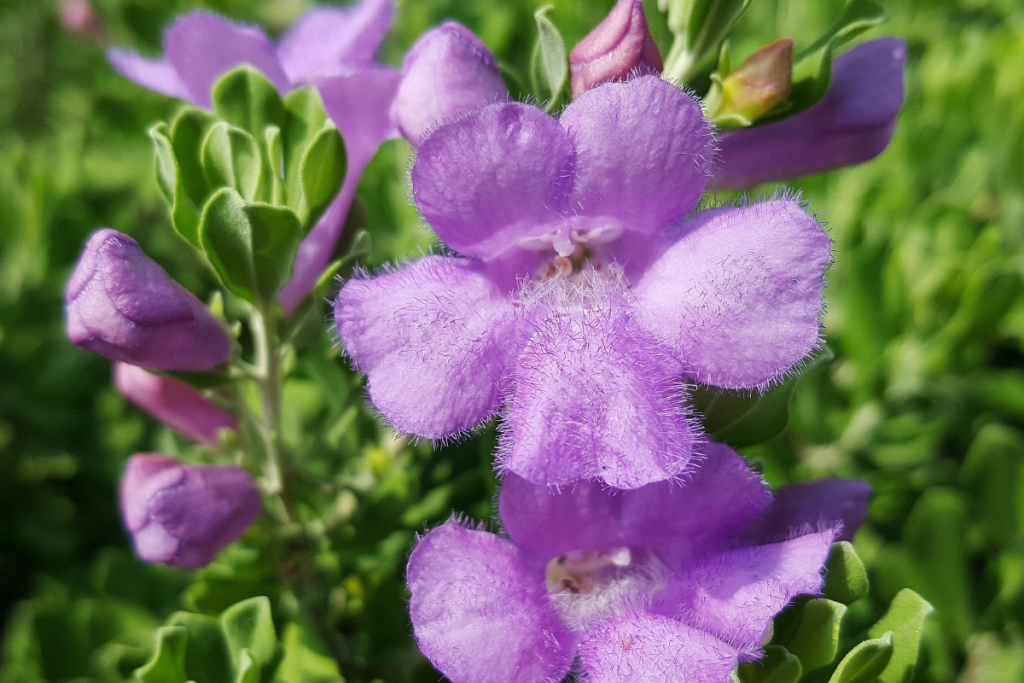 This summer the Texas Sage is as pretty as we’ve ever seen. Everywhere you look there are large Texas Sage shrubs with masses of purple blooms. Texas Sage is one of our most popular native plants, a medium-sized shrub with several varieties to choose from including compact varieties. Texas Sage has soft silver to gray foliage with a beautiful display of long-lasting lavender to purple blooms from summer into fall.

Texas Sage is native from Northern Mexico through the Rio Grande Plains, Texas, and into New Mexico. It’s sometimes called  (barometer bush) because the blooming process is initiated by high humidity or excessive soil moisture before and after rain. It grows well in most soils and it is extremely drought and heat tolerant making it very easy to care for once established. Texas Sage is widely used along Texas highways and commercial landscapes because of it ability to withstand some of the harshest conditions. In 2005 Texas Sage was named the official Texas Native Shrub of Texas.

Texas Sage thrives in full sun and well-drained alkaline soil. Watering in dry summer months will make it grow faster, but overwatering or poor drainage can easily kill it.  Texas Sage needs at least 8 hours of sun to perform well, anything less will cause it to become leggy and bloom less.

Sheared hedges are common, especially in commercial plantings, but maintaining their natural shape with light pruning produces a healthier and more aesthetically pleasing plant. This can be done during the late winter months or early spring before buds form, and again in early summer.

Texas Sage is not susceptible to insects or diseases other than cotton root rot. Root rot is caused by poor drainage, standing water, or overwatering. Planting in a well-drained sunny location will greatly discourage this.

There are several different varieties of the popular native Texas Sage which differ in size, growth habit, and slightly different shades of foliage. Listed below are the most common Texas Sage varieties found in our local landscapes and in full bloom right now!

Silverado is one of the most popular varieties of Texas Sage. This evergreen variety has a compact, rounded growth habit that is more full and dense to the base than other varieties. With rosy-purple flowers that appear from June through October, again initiated by periods of high humidity and rain. Grows 6’ tall and 6’wide. Best planted in full sun. Drought resistant and tolerates poor soil.

Desperado Sage is also a very popular drought resistant evergreen plant with silvery gray-green foliage and lavender to purple blooms that appear from summer through fall. With its compact growth habit it works well planted as a specimen or a hedge in any sunny landscape. Water regularly; do not overwater. Grows 4.5’ x 4.5’ tall and wide. Tolerates poor soil.

Heavenly Cloud is an excellent variety because of its ability to bloom more often.  Growing to 6’ tall and 6’ wide. Best planted in full sun. Rose to magenta blooms atop dark green foliage from early summer through fall. Avoid over-watering as this can damage the root structure of this variety. Drought resistant and tolerates poor soil.